This album is to be played loud in the foreground.” SAVAGES, 2013

Savages will release their debut album Silence Yourself on May 7th 2013 on Matador Records / Pop Noire. Available on LP, CD and download, the album was recorded in north-west London’s Fish Factory during a three week period in December 2012, and is produced by Johnny Hostile / Rodaidh McDonald.

Clocking in at 38 minutes, Silence Yourself opens with an excerpt from the John Cassavetes film ‘Opening Night’, and features brand new recordings of ‘Husbands’, ‘I Am Here’ and ‘City’s Full’ - first heard on debut single ‘Husbands / Flying To Berlin’ and the ‘I Am Here’ live EP - both previously released on singer Jehnny Beth’s record label Pop Noire.

First song to be revealed from the album is ‘She Will’, which can be heard right now HERE

The album will be available to pre-order from iTunes from Tuesday 19th at midnight, and fans who do so will instantly receive an mp3 download of ‘She Will’.

The album comprises eleven tracks that are uncompromising and delivered with fierce conviction. 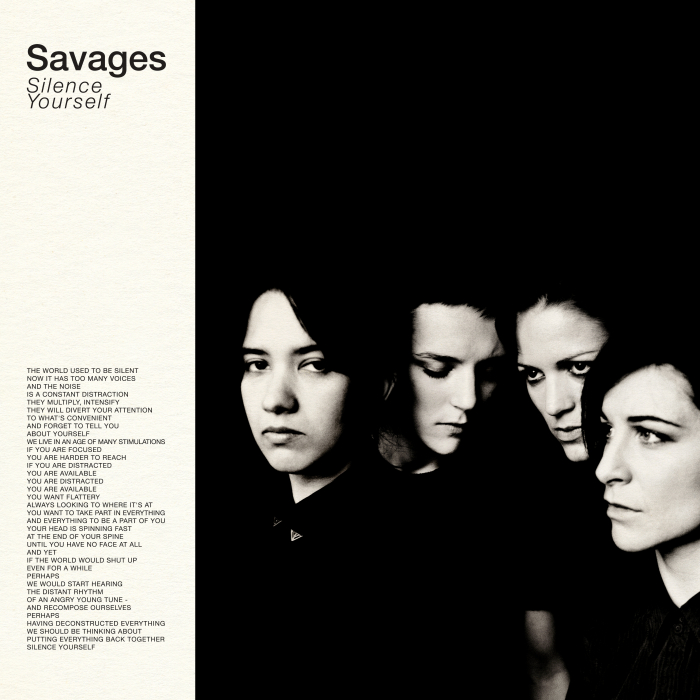